Art Burton lives in Latties Brook, Nova Scotia near the fictitious village of Raymonds River, the setting for many of his stories. He writes mystery novels and creative non-fiction short stories about Hobos who passed through central Nova Scotia during the Great Depression, along with a variety of other short stories.

He worked for 35 years at the Halifax Herald, 26 of those as a printer in their composing room. In 2002, he decided it was time to stop printing and start writing by taking an early retirement and moving from the city of Halifax to rural Nova Scotia.

He lives on the family homestead with his wife, Flame and adopted dog, Charlie.

Connect with Art on his website, his Amazon Author page and at Smashwords.

For a glimpse of the first chapter of Concealed from Sight go to YouTube Video . 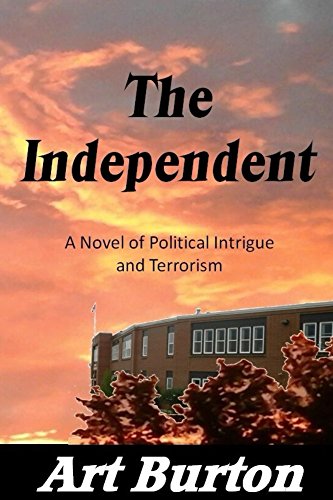 Someone is blowing up schools in America, and they want money to stop doing it. Terrorists, extortionists, the people don’t care what description the authorities have assigned to these criminals, they just want the destruction to stop. Governor Peter Westin of Georgia, the site of the first bombing, is determined to bring these felons to justice. Maybe a little too determined.

Available at Amazon.com and other outlets.

It can also be borrowed from your local library.

The super-rich, commonly called the 1%, believe there is nothing money can’t buy.
Dot-com billionaire Keith Grant intends to put that belief to the ultimate test when he goes after the killer of his friend and business partner, Craig Flint. He tries to assist the police in any way he can, but soon realizes they are tied-up with rules and procedures that slow down the search rather than assist it.
At this point, he goes rogue. Anything that works becomes his credo.
Does justice prove to be one of those things beyond the ultimate reach of an unlimited supply of money? Not if Keith has his way.

Hobos became the face of the Great Depression for the people who lived on small family farms in the rural areas of our country. These farms were mostly self-sufficient. The farmers practiced living locally long before it became the fad it is becoming today with things like the hundred mile challenge. They raised their own animals, cows, chickens, pigs; grew their own fruits and vegetables; and heated their homes with woods cut from their own woodlots. For many of them, helping others was the natural thing to do when less fortunate strangers came knocking of their door.
These short stories share the events that happened to one family in central Nova Scotia told through the eyes of writer’s mother as she remembered and related them forty years later. The stories are presented as fiction, but each contains a kernel of truth as its central theme. These are stories I heard so often, that indeed the characters seem like Hobos I Have Known. ISBN: 9780986891809.

The follow-up to Hobos I Have Known is here. In the book, Hobos I Have Known, I focused on the men who travelled  through the rural East Hants area of Nova Scotia during the Great Depression of the 1930’s. More Hobo Stories goes  farther afield in the search for the adventures of these itinerant travellers.

We venture into the towns and cities and away from the farm life in some of these stories. The men were still looking for a meal, but often those feeding them didn’t have the benefit of a farm to provide the food. Still the need to help was there. The final story in this book has nothing to do with the Hobos. Most houses during this period were still serviced with the little, red shack out back. Who knew what all was involved in deciding how and where to build these places. Enjoy.

George Wilson has disappeared from his farm in Raymond’s River,  a small community in rural Nova Scotia. His wife, Connie, is in a frantic state. Was George mugged, robbed and left for dead somewhere? That’s a possibility. George didn’t believe in banks and always carried  a wad of cash in his wallet.

Did he get drunk and put his truck into a ditch somewhere? Again, a possibility. George and strong spirits were no strangers to each other. Or did he pack his bags and head for the lure of the big bucks to be made in the oil fields of Alberta? Always a chance of that. George believed an infusion of cash would get his farm back on a more profitable footing. Corporal Scott Bowen, with help from Detective-Sergeant  Jim McDonald must figure out which of these choices actually took place. But wait. Is there a fourth option that no one has thought of yet? Jump into this book to follow the twists and turns the investigation takes.

Rich, industrialist Matthew Lane fatally crashes his red Cadillac into a power pole and in the process almost takes Detective Sergeant Jim McDonald with him. Debate rages about whether the event was an accident, a suicide, or a homicide. McDonald leads the homicide supporters. He, after all, witnessed the event. Now, he strives to figure out why Lane, who in Jim’s opinion drove like a man possessed by the devil, lost total control of his car. To add fuel to the fire, two more apparently unrelated accidents are tied into the case. Jim must solve this dilemma before anyone else, including himself, dies. We, the reader, know who did it. What we must figure out is how. Are you up to the challenge?

Detective-Sergeant Jim Macdonald and his sometime sidekick Corporal Scott Bowen of the RCMP. The duo have teamed up again to track down the killer of a well-respected farmer from Raymond’s River in rural Nova Scotia. The twists and turns that became familiar to readers in the first book are magnified in this new novel. Suddenly one murder resolves into two and the identity of the killer of this second murder catches everyone off guard.

Throw in a top-notch defence lawyer and a fundamentalist pastor and this story will keep you turning pages late into the night.

Most people at one time or another daydream about finding a huge stash of money and speculate what they would do with it. It usually starts off with spend, spend, spend, then the reality of being discovered with someone else’s money sets in. The mind goes into overdrive trying to surmount all the eventualities.

The Bag of Money embraces and overcomes these problems in what I believe creates a different and interesting approach.

This dilemma faces usually honest, upstanding citizen John Lester. While leisurely walking through the woods with his dog, Danka, he stumbles across a hockey bag full of money. Drug money, lost money, manna from heaven, he’s not sure which. Should he keep it or turn it over to the police? The decisions he makes changes his life forever.

Detective-Sergeant Jim Mcdonald is back on the case with his usual dogged perseverance and drives it to what I hope you will accept as a successful conclusion.

“In Texas, they think some men just deserve to die. That defense even stands up in court. Nothing lower than messing with another man’s wife. Breaks one of God’s fundamental rules.” A disgruntled husband runs this explanation by his sheriff friend. Will it stand up? Karl doesn’t care. He knows what he has to do.

Included with Cabin Fever is the short story, God Works in Mysterious Ways. This story explores Karl’s justification for his actions after he confesses his deeds to his religious mentor, Pastor Dave.

Not one to miss a chance to increase the coffers of his church, Pastor Dave exploits Karls misdeeds to save sinners and allow them to buy their own salvation. Read on to see if you agree that indeed God does work in mysterious ways. ISBN: 9781458105905

The following stories are fiction. I do have a granddaughter named Emily who inspired these stories while visiting one summer. But, there is no real Emily with super powers except in the minds of Grandparents everywhere. If there were a young girl with super powers, it would be Emily. Just the name exudes power. I invite you to sit back, suspend reality for a few moments and enter the life of an eight-year-old super hero: Super Emily. You don’t have to be eight-years-old to take pleasure in a book about an eight-year-old. Parents, aunts, uncles, everyone, dig in and enjoy these adventures. If you and your Emily enjoy them at the same time—you reading to her, her reading to you—so much the better. ISBN: 9780986891830

The unlikely combination of a paper carrier and freshly fallen snow combine to bring a murderer to justice. Political intrigue about how politicians get themselves elected and who really make the decisions involved in running a city add an element of intrigue to the story. Set in Halifax, Nova Scotia, a city where snow is a given, the conclusion to this story will catch you by surprise.

This site uses Akismet to reduce spam. Learn how your comment data is processed.

** Until further notice, meetings for the group have been suspended ** The East Hants Writers Group meets the third Tuesday of every month (except July, August and December) at the Elmsdale Public Library between 6:00 pm and 8:00 pm. Contact: tibert@live.com